My husband and I recently visited Newfoundland for the first time. If you haven’t been, you should go. It’s got amazing expanses of wilderness and heaps of wildlife, including the edible kind. Also, icebergs in the spring and early summer.

Also, two flags to choose from. Or fly both, if you remember life in Newfoundland before it joined Canada in 1949.

Driving around St. John’s, we quickly noticed the recurring motif of the big wooden box at the end of the driveway. These were generally octagonal in cross-section, made of spaced slats nailed to a footed frame, with a hinged lid made up of two sides of the octagon, like in this photo. Some were square, some lean-to shaped, some hexagonal, some even round. Many were positioned near posts with a reflective or eye-catching substance mounted about three feet above ground. 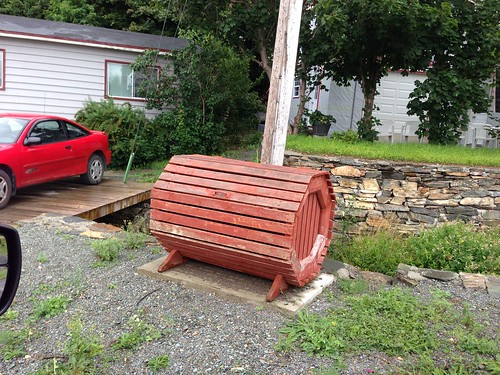 We thought at first that they might be for street sand, gravel, or salt, for winter. That explained the location posts—Mr. Plow Man, don’t come any nearer—but then why have them out in the summer? We reasoned that, being wood, they were more trouble to move than to leave in place all year. But then, the octagonal shape seemed counterintuitive to good body mechanics for shovelling. And surely the spacing of the slats would let water in, and leak sand or salt out?

And then we saw the box in use. A garbage truck parked in front of a house, and the garbage man hauled several big green bags out of the box.

It’s a box for the garbage! Okay then. But… why? Why a special wooden box? Why not the big green wheely bin you see everywhere else? We puzzled over this all day, and I finally asked the waitress who served us at dinner that night.

“It’s because of the wind,” she said. “It gets mad windy in Newfoundland. Plastic or metal cans smash into things and cause damage, or get damaged, or they lose their lids, or they flat-out disappear in a high wind. Garbage boxes stay where they’re to.”

And suddenly it all made sense. The wood box is heavy enough to be immovable by all but the most determined hurricane-force wind. The octagonal shape presents a smaller surface area to the weather, which creates better wind resistance. The widely-spaced slats allow air to pass through the box, rather than around it, which in turn helps keep the inside of the box relatively clean and dry, and make it a hostile environment for insects or small critters. The hinged lid can’t fly off, especially if, like many we saw, it has a latch mechanism to keep it from even lifting in the wind.

The waitress told us “they charge seventy bucks for the basic one”, which I took to mean that these boxes are mostly store-bought rather than homemade. And since everyone has one, it’s no surprise that many of them get special paint jobs, and their ends decorated with house numbers and/or some other sort of personalizing motif. I wish I had got photos of some of the best ones we saw, but my husband seemed to think that garbage boxes are a weird thing to collect photos of, so the above is the only snap I got.

I developed a weird affection for the garbage boxes we saw on our travels. Whether they were weathered and falling apart, newly-painted and decorated, single or tandem, large or massive, octagonal, hexagonal, round, square, or designed to match the house they belonged to, I noticed all of them, and I loved them. At their most basic, they exemplify the cheerful practicality that exemplifies the Newfoundlander, and those that go beyond basic tell a little more about what their owners enjoy or are proud of: their families, their occupations, their hobbies, their homes, their country, and especially their province.

How light do you travel? I am an experienced packer…

I've only been back from my unexpectedly long, made-possible-by-points trip…

I am something of a rarity in editorial circles: an…