The Dictionary Project is a post-a-day exploration of The Century Dictionary and Cylopedia, a twelve-volume set printed in New York in 1901. The Project runs from October 1, 2014 to September 30, 2015, and matches volume numbers to calendar months. Volume X is The Atlas, and today is Day 25.

Much has changed in Africa since the time of this map and this dictionary, so I’m going to tackle it over two days. Day one: the northern part, above the western prominence. Trigger warning for European colonialism.

Nearly every European power had its fingers in Africa in 1897. The overview map of the entire continent even includes a helpful colour-coded key to help you identify the ruling power at a glance, and highlight the (shockingly small number of) independent states. I’ve included this map here to give you that overview, because as soon as we turn the page, the colour key no longer applies. *sigh*

The French controlled much of the northwest, as you can see here, though the word “French” really only appears in the tiny area called “French Guinea”. But the border of their territory includes  territories that are French-speaking a hundred years later: Sénégal, Côte d’Ivoire, Algeria, Tunisia, Benin.

The traditional pink of the British empire is visible here, too, in the tiny Gambia, Sierra Leone (which presumably was Spanish at some point), Gold Coast and the “Niger Territories” (now called Nigeria).

For a complete breakdown of who controlled what, it’s worth reading the several paragraphs directly south of Liberia, on this map. And then have a look at the same part of Africa on Google maps, to see how much has changed! Lots more tiny nations on that western prominence in 2014 than there were in 1897. 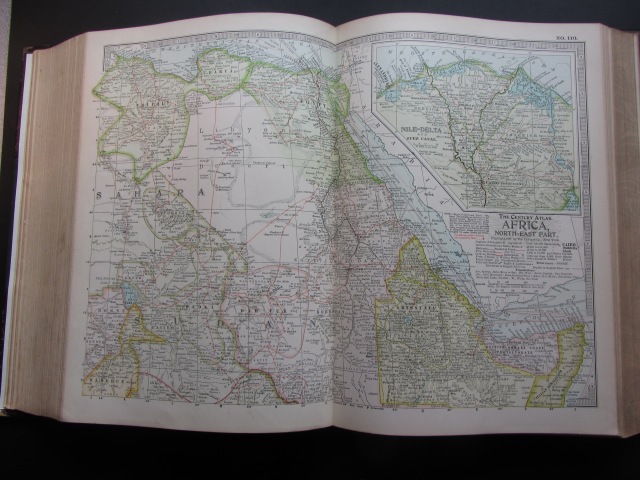 The note about what is whose, on this map of the northeastern part of Africa, is much shorter, and so I’ll reproduce it here:

Egypt (El Misr) and Tripoli, with Barca (Ben-Ghazi), are tributary to the Turkish Empire. Egypt is ruled by the Khedive, under British influence. Nubia and Egyptian Sudan formed the Kingdom of the Mahdi, but are gradually being occupied by the English. Abyssinia is independent. Sudan and Sahara are occupied by native States and Tribes.

There have been massive changes in borders in northeast Africa, too. Tripoli-and-Barca are now part of a much larger Libya; some of Sahara is now Chad; and Nubia has been absorbed into Sudan; Abyssinia is now Eritrea and Ethiopia, and the British Somali Protectorate and Italian Somaliland are united as Somalia.

The Dictionary Project: A New Approach

Wow, that month of posting maps and map-related musings was…