At the Surrey International Writers’ Conference in October 2014, I attended a workshop called “Short Fiction Explained (to Novelists)” led by Mary Robinette Kowal, a longtime friend of the conference and co-host of the fabulous Writing Excuses podcast.

Mary’s workshop approached short fiction using a concept originated by SFF author Orson Scott Card, called the MICE Quotient. M.I.C.E. stands for Milieu, Idea, Character, and Event, and the mnemonic is a way of identifying what kind of story you’re telling, where that kind of story starts and finishes, the kind of reader expectations you’re setting up and need to satisfy, and what you need to include, and what to exclude, to tell your story while keeping it tight. (What you need to include is conflict that delays or prevents the ending; what you need to exclude — from a short story — is anything that doesn’t support that kind of conflict.)

M = Milieu (aka Setting)
A milieu story starts when the character(s) enter(s) the setting, and finishes when they leave it (or vice-versa). Story conflict prevents or delays the character’s exit from the milieu.
Example: Alice in Wonderland, The Hobbit (starts with leaving the Shire, ends with returning to the Shire)

I = Idea
Idea stories start with a question, and finish when the question is answered. Story conflict prevents or delays the answering of the question.
Example: Mysteries (the question often being “who killed this person?”)

E = Event
An event story starts when something goes horribly wrong with the status quo, and finishes either when the opening problem is solved, or everyone dies. (Which, you know, also a solution.) Story conflict prevents the solution of the problem, and/or raises the body count.
Example: Most thrillers. 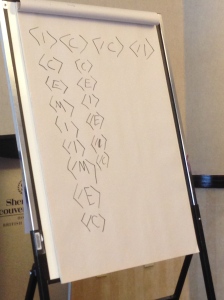 Every new element you add to a story — every character, setting, idea, or event — comes with a price, and that price is word count. Each new character or scenic setting costs 500-1000 words. A 75,000-word novel gives you the scope to use every one of the MICE elements, or multiples of them. But in a short story (3000-10000 words), you’re best to limit yourself to one, or two at the most.

If you are using more than one element, thinking about nested codes (as in HTML) can help. Every element you use must be introduced, and concluded, just like HTML codes. And LIFO (last in, first out) applies to MICE codes, just as it does to HTML. The various conflicts, subplots, etc., in your story (no matter its length) need to wrap up in a logical manner. That is, you need to wrap up your story elements in the reverse order that they were introduced. Last in, first out.

The Wizard of Oz (the movie) illustrates this beautifully:

<Character> Dorothy Gale is dissatisfied with her life

<Event> Dorothy runs away from home

</Idea> “You had the power the whole time”

The resolutions of each element come pretty close together, at the end of the movie, but there is nonetheless a logic to the order in which they are resolved.

Mary’s approach to the writing of short stories made a lot of sense to me, and I have been wanting to explore the possibilities ever since. So my plan is to write a series of short stories, each with a different primary element. I haven’t decided yet if I’m going to try to write the same basic plot and characters for each story, or go with different plot and characters for each. That part needs a little more thought, and work.

I feel like this is a useful tool to apply to stories that aren’t gelling, for some reason, or that feel faulty in their conclusion. (We’ve all read books that didn’t entirely satisfy because some aspect of it wasn’t adequately concluded, haven’t we?) I’ll be referring back to this concept the next time I can’t quite figure out why a story isn’t working.

I highly recommend listening to this episode of Writing Excuses, all about the MICE Quotient, if you’re interested in hearing Mary and colleagues discuss the concept and provide illustrative examples.

How Times Have Changed!

Ten years ago, when I did NaNoWriMo for the first…

One Stop for Writers

A New Library In Town: One Stop For Writers

If there's one thing all writers agree on, it's that…